General Motors announced a few weeks ago they are closing their Lordstown, OH assembly plant, putting a lot of people out of work.

Sunday — March 17 — Trump spent most of the day rage tweeting about the first thing that popped into his mind . . . Fox, Saturday Night live, “Judge” Pirro, Muslims, Democrats . . . then he unleashed these two completely incomprehensible tweets.

Democrat UAW Local 1112 President David Green ought to get his act together and produce. G.M. let our Country down, but other much better car companies are coming into the U.S. in droves. I want action on Lordstown fast. Stop complaining and get the job done! 3.8% Unemployment!

Is he telling workers to take over the factory?   Here is an earlier, equally loony Presidential order to GM.

Because the economy is so good, General Motors must get their Lordstown, Ohio, plant open, maybe in a different form or with a new owner, FAST! Toyota is investing 13.5 $Billion in U.S., others likewise. G.M. MUST ACT QUICKLY. Time is of the essence!

Let’s face it:  D. J. Trump is below-average intelligence and nutty as a fruitcake. 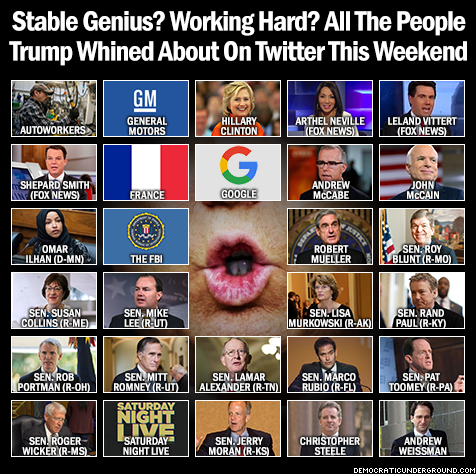 A culture lives or dies based on its allegiance to unwritten rules of conduct and unstated norms, on the signals sent about what kind of conduct constitutes good character and honor and what kind of conduct constitutes dishonor and corruption. Like each of us, our leaders are all too human, flawed and imperfect. But that reality can’t make us indifferent or cynical when it comes to holding those in authority to reasonable moral standards. After all, cultures are shaped by the words and deeds leaders, including political leaders, validate or invalidate.

“To his equals he was condescending; to his inferiors kind; and to the dear object of his affections exemplarily tender,” Henry Lee said in his eulogy of George Washington. “Correct throughout, vice shuddered in his presence, and virtue always felt his fostering hand; the purity of his private character gave effulgence to his public virtues.”

But the other reason we should pay attention to the tweets and other comments by the president is that they are shafts of light that illuminate not only his damaged soul, but his disordered personality.

It doesn’t take a person with an advanced degree in psychology to see Trump’s narcissism and lack of empathy, his vindictiveness and pathological lying, his impulsivity and callousness, his inability to be guided by norms, or his shamelessness and dehumanization of those who do not abide his wishes. His condition is getting worse, not better—and there are now fewer people in the administration able to contain the president and act as a check on his worst impulses.

This constellation of characteristics would be worrisome in a banker or a high school teacher, in an aircraft machinist or a warehouse manager, in a gas station attendant or a truck driver. To have them define the personality of an American president is downright alarming.

Whether the worst scenarios come to pass or not is right now unknowable. But what we do know is that president is a person who seems to draw energy and purpose from maliciousness and transgressive acts, from creating enmity among people of different races, religions and backgrounds, and from attacking the weak, the honorable, and even the dead.

Donald Trump is not well, and as long as he is president, our nation is not safe.

Here’s a brief summary of many of Trump’s Sunday tweets:

The Federal Communications Commission or Federal Election Commission should investigate whether “Saturday Night Live” and late-night talk shows are in collusion with Democrats and/or Russia because they attack him so consistently.

Attacked late Sen. John McCain, R-Arizona, for allegedly sending the FBI the Steele dossier before the election — and working with Democrats to do so. (Also, Trump called McCain — who, it’s worth noting, is dead — “last in his class” at the US Naval Academy.)

Urged Fox News Channel to reinstate host Jeanine Pirro after she was suspended for questioning the patriotism of Democratic Rep. Ilhan Omar of Minnesota, who is Muslim.

Urged FNC to stand up for host Tucker Carlson, who has seen some advertisers pull out of his show following the release of a series of caustic and offensive remarks he made on a radio show between 2006 and 2011.

Accused General Motors of having “let our country down” in the wake of the news that the company was relocating four American factories.

Attacked FNC anchor Shep Smith and two other weekend anchors at Fox, alleging they had “been trained by CNN prior to their ratings collapse.”

Alleged that Democrats tried to “steal a presidential election,” calling it “the biggest scandal in the history of our country.”

Retweeted Jack Posobiec, who among other things, is a leading promoter of the Pizzagate and Seth Rich conspiracy theories.

All of this — and lots, lots more — in the space of a single day.