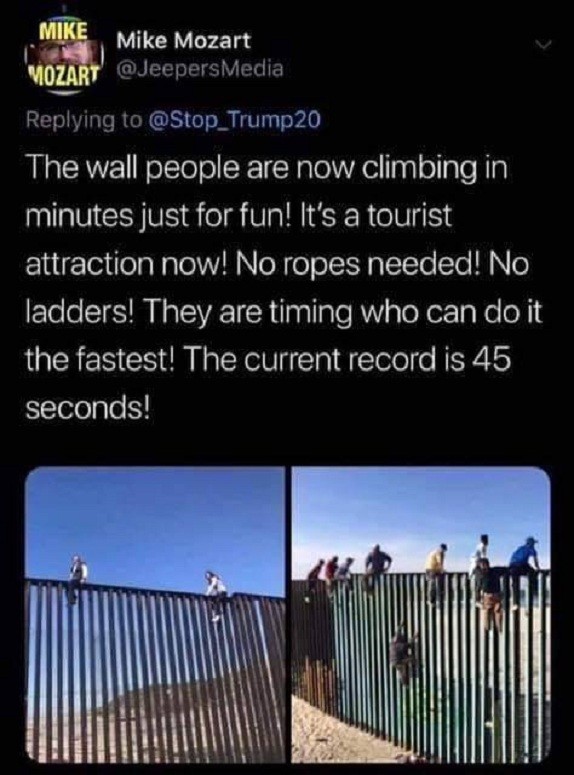 Courtesy of The Daily Beast:

“We have, I guess you could say, world-class mountain climbers. We got climbers,” Trump said beside a newly finished section of the barrier in Otay Mesa, California, which tops heights of 30 feet. “We had 20 mountain climbers. That’s all they do—they love to climb mountains. They can have it. Me, I don’t want to climb mountains. But they’re very good, and some of them were champions. And we gave them different prototypes of walls, and this was the one that was hardest to climb.”

The climber test, Trump boasted, is proof that “this wall can’t be climbed.”

The problem? The country’s top climbers have no idea what the hell Trump is talking about.

“I have never heard of any climbers ever being recruited to try and climb a border wall,” said Jesse Grupper, who won the gold medal in the men’s sport lead category of this year’s USA Climbing Sport & Speed Open National Championships.

“I absolutely have not heard of anyone testing sections of border wall,” said Kyra Condie, who currently ranks second among the nation’s women boulderers and is considered a serious contender for the U.S. team when the sport makes its Olympic debut in Tokyo next year. “It would even be hard to find any of us willing to do anything to help Trump and his efforts in any way.”

“Definitely no well-recognized U.S. climbers have taken part in something like that,” said Ross Fulkerson, a seven-time member of the U.S. national team who is currently ranked third in the country. “I haven’t heard of any climbers ever helping out with testing.”

The Daily Beast actually reached out to quite a number of organizations who you would think might have knowledge of such a test, and not one of them had any fucking idea what Trump was talking about.

Donald Trump is defined by his unfettered dishonesty and the number of things that he is willing to lie about.

In short he is willing to lie about everything, and simply does not expect to be called out over it.

This lie is just stupid, but quite a number of them have real world consequences.

By the way, you know this wall is getting climbed now, don’t you?