Speaker Nancy Pelosi announced an impeachment inquiry into Trump’s violation of law AND HIS VIOLATION OF THE CONSTITUTION.

Meanwhile, the Senate has unanimously agreed to Schumer’s resolution calling for the whistle-blower complaint to be turned over to the Senate and House intelligence committees immediately.

Trump’s response?  He’s in Trump tower after making a speech at the UN where he is now rage tweeting. 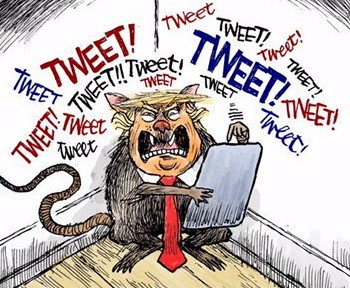 And — by the way — I know the argument that the Republican-controlled Senate will not find Trump guilty.  DOES NOT MATTER.  The House inquiry will lay bare every single bit of Trump’s criminality day in, day out, right up to the 2020 election.  And that’s what we need, who cares if he’s found guilty.

We now learn that Trump called Pelosi today in a vain attempt to save his fat ass.

People in a position to know report Trump called Pelosi and asked her:

“Can we do something about this whistle-blower complaint?  Can we work something out? “

“Yes, you can tell your people to obey the law.”

Pelosi made it clear that it is full steam ahead.