By now everyone has heard the US special operations forces took out an ISIS leader that we have been tracking for several years.  While this is an important development, Trump has screwed it up six ways to Sunday.

BRAGGING AND RUBBING THEIR NOSES IN IT

Anyone who watched Trump’s 45-minute-long raving press conference heard him describe in graphic detail how al-Baghdadi died — in Trump words “he died like a dog!”  Trump went on:

He died after running into a dead-end tunnel, whimpering and crying and screaming. The compound had been cleared by this time, with people either surrendering or being shot and killed. Eleven young children were moved out of the house un-injured. The only ones remaining were Baghdadi in the tunnel, who had dragged three children with him to certain death. He reached the end of the tunnel, as our dogs chased him down. He ignited his vest, killing himself and the three children. His body was mutilated by the blast, but test results gave certain and positive identification.

While Trump may relish these details, he clearly does not understand that his rant will do nothing but enrage ISIS followers — who are many.  Trump just handed them a recruiting bonanza.  And — any American now living, working or traveling in areas of ISIS presence is now fair game to be captured, tortured, beheaded and God-only knows what else.  Thank you, Trump . . . you fool.

Everyone remembers the photo of Obama, Biden and their military and civilian security advisers watching reports during the raid that killed Bin Laden. 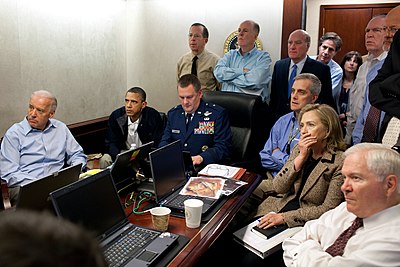 Not to be outdone, the Trump White House issued this photo. 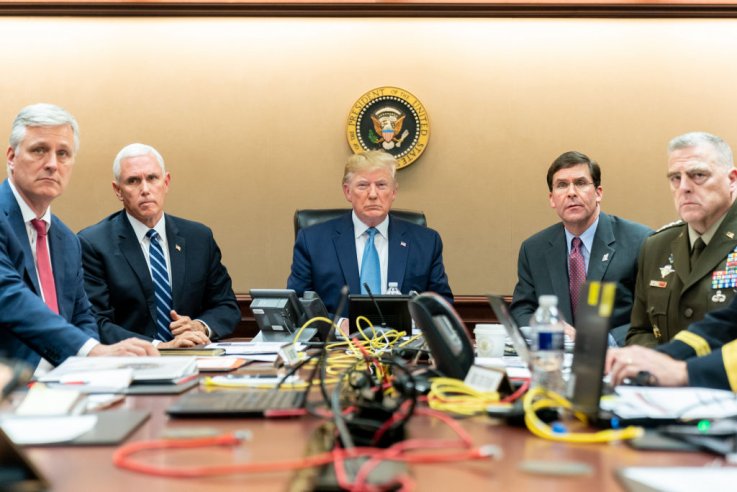 According to a report from the New York Times, Donald Trump’s claim of being behind the military incursion to collect ISIS leader Abu Bakr al-Baghdadi was a huge overstatement — and —  he made the long-planned operation more difficult because of his impulsive decision to pull U.S. troops out of Syria.

As the Times reports, military intelligence officials have been tracking Baghdadi’s movements for months after getting tips from one of his wives and a courier.

According to the report the tips “came following the arrest and interrogation of one of Mr. al-Baghdadi’s wives and a courier this past summer, two American officials said.”

“Armed with that initial tip, the C.I.A. worked closely with Iraqi and Kurdish intelligence officials in Iraq and Syria to identify Mr. al-Baghdadi’s more precise whereabouts and to put spies in place to monitor his periodic movements,” the report notes, before adding the president’s abrupt pull-out from Syria forced the military’s hand.

“Trump’s abrupt decision to withdraw American forces from northern Syria disrupted the meticulous planning and forced Pentagon officials to press ahead with a risky, night raid before their ability to control troops and spies and reconnaissance aircraft disappeared, according to military, intelligence and counterterrorism officials. Mr. al-Baghdadi’s death, they said, occurred largely in spite of Mr. Trump’s actions,” the Times reports.

This runs contrary to the president’s claim on Sunday morning that he has been focused on tracking down the leader for years while stating he has constantly been asking about the whereabouts of the Islamic terrorist since he came into office.

The report goes on to note that nabbing the ISIS head had been called off previously.

“The initial planning for the raid began this past summer. The Army’s elite Delta Force commando unit began drawing up and rehearsing plans to conduct a secret mission to kill or capture the ISIS leader, and faced huge hurdles,” the Times reports. “The location was deep inside territory controlled by Al Qaeda. The skies over that part of the country were controlled by Syria and Russia. The military called off missions at the last minute at least twice.”

You can read more details about the raid here.