In a new report for The Intercept, journalist Lee Fang says that one of the key players in new revelations turned over to investigators by an associate of Rudy Giuliani “was a known stalker with mental health issues.”

WhatsApp messages provided by Lev Parnas show communications with Trump donor and aspiring GOP lawmaker Robert F. Hyde appear to show an effort to surveil former US ambassador to Ukraine Marie Yovanovitch. In the messages, Hyde claims to have details regarding Yovanovitch’s movements and location in Kyiv and says he has connections to local security services who could potentially help track her.

“The startling messages show the extent to which the Giuliani associates were willing to at least entertain extreme tactics from a campaign donor who has courted controversy and even unsettled others, including fellow supporters of the president,” Fang writes.

According to Fang, police records show that Hyde “violated a restraining order issued by a Washington, DC superior court judge at the request of a Republican consultant who says that Hyde stalked her and intimidated her family over the last year.”

One of the reports obtained by The Intercept disclose that Connecticut police “confiscated Hyde’s firearms in connection to his violation of the restraining order,” adding that Hyde was “reported to authorities for ‘unsettling behavior’ and trespassing at a church in Connecticut, according to a separate police report last summer.”

Speaking to The Intercept, acquaintances of Hyde say he has a “history of erratic behavior.”

“Hyde publicized that he was placed in a psychiatric facility in Florida last May, following an incident at the Trump National Doral Miami resort,” Fang writes. “A report written by the Doral Police Department at the time notes that Hyde expressed fear for his life and told officers that he ‘was scared due to several painting workers and landscape working trying to do harm to him because they weren’t working.’”

Read Fang’s full report over at The Intercept. 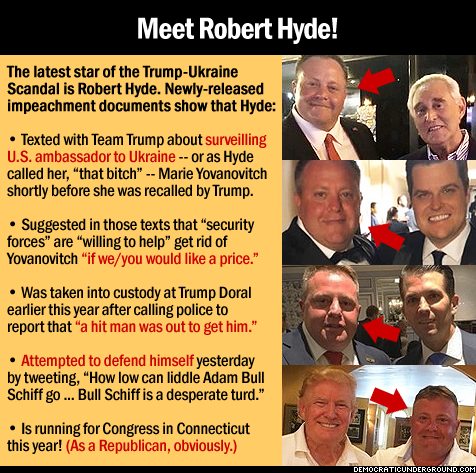