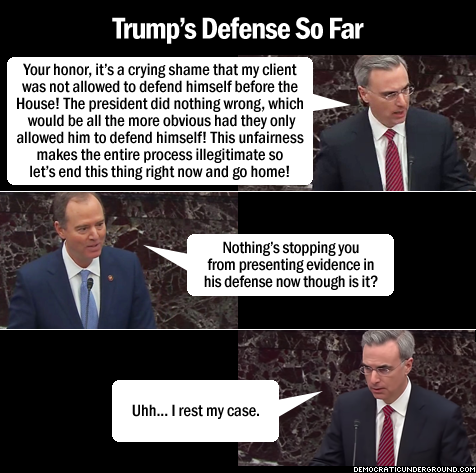 All of which raises the questions:

President Trump’s attorney Jay Sekulow flew into a rage Tuesday evening because he misheard a common legal phrase. Representative Val Demings, one of the House impeachment managers, said, “The president’s lawyers may suggest that the House should have sought — that this House should have sought these materials in court, or awaited further lawsuits under the Freedom of Information Act, a.k.a. FOIA lawsuits.” She repeated a phrase “FOIA lawsuits,” which — even though “FOIA” is a well-known term for lawyers and journalists, and even though she helpfully spelled out the acronym for her audience — struck Sekulow as unfamiliar.

Sekulow decided the word he had heard was “lawyer lawsuits.” He further decided that this phrase was a pejorative and launched a furious riff, denouncing her use of this heretofore novel term with a level of indignation that would be appropriate if she had used some kind of racial slur…

Unbelievably, having been caught in this absurd and embarrassing error, the White House insisted Sekulow was correct. “When you read the transcript, it says ‘lawyer lawsuit,’” insisted White House legislative affairs director Eric Ueland. “It’s not clear to what transcript Ueland is referring,” reported the Washington Post, “but the Federal Document Clearing House transcript includes no references to ‘lawyer lawsuits’ besides Sekulow’s.”